CBDC on Algorand. First one, but more to come!

The future shape of digital money is just being designed and developed, it is fascinating and a bit scary at the same time. We see 3 clear trends developing in parallel. The first was state-free money (like Bitcoin), second being corporate 'stable'coins (like Libra or JP Morgan), and third being Central Bank Digital Currency (more than 60 central banks are working on their own digital currency right now).

Especially the last trend (CBDC) needs full attention, it will be a very powerful tool, can change the world for better if implemented the right way, and on the other hand, it is a bit worrying to imagine what could happen if too many shortcuts are taken designing this tool. Fortunately, there are examples of good or at least promising implementations of CBDC, just to mention the one for the Republic of the Marshall Islands, who had chosenAlgorand for the implementation of their CBDC.

Let's have a look at what is happening in the CBDC space overall. Are we preparing for Global Currency at some point or are we going to have country-specific CBDC in the first place? Maybe CBDC will combine efforts with corporate digital currencies?

I recently attended the Consensus Distributed event (originally NY Coindesk Conference, virtual and free this year). Among other interesting topics regarding major undertakings in the blockchain and cryptocurrency industry, the agenda was full of CBDC topics and "Libra-like" topics.

Just to give you a feel - below workshop was a big one: 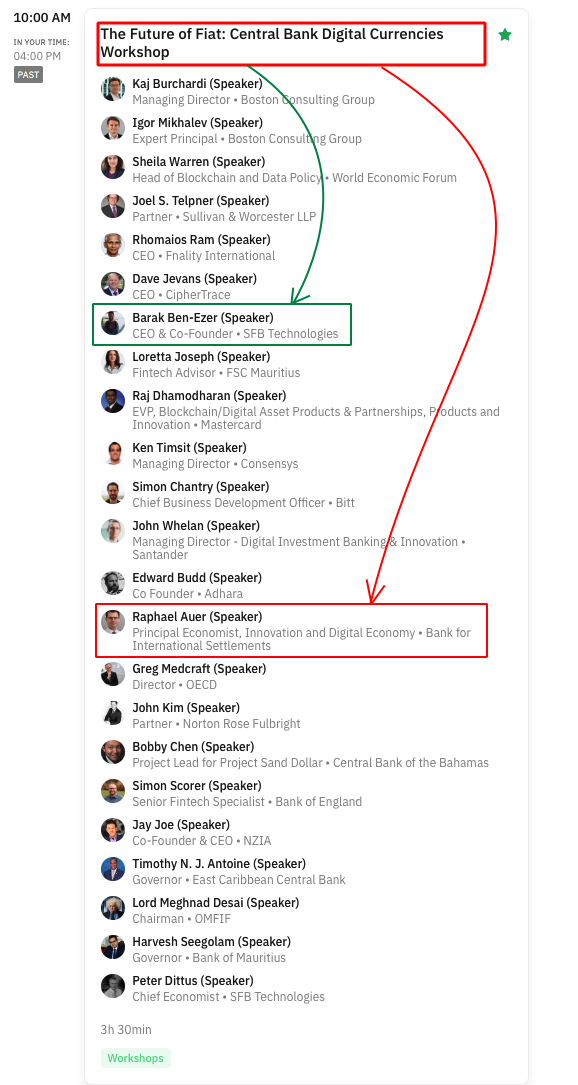 Among other proposals, a representative from Bank for International Settlements (BIS, kind of central bank for Central Banks)) was discussing the current approach for Central Banks to design and implement digital currencies (indirect CBDC, Direct CBDC, Hybrid). Who knows, maybe at some point we are going to see one Global Digital Currency for all Central Banks? (at least this is how I interpret involvement of BIS into this discussion). Nevertheless, the below architecture depicts the current thinking in this regard.

If you have missed the Consensus Distributed conference, no worries, here is the document presented by BIS.

Whether the Global CBDC is a probable scenario or not, time will tell. We can only hope that it will be designed well.

Wait. Designed well? What does it actually mean?

Well, maybe that is a dream, but I do hope that if we are going to see CBDCs or other forms of hybrid commercial/nation-state / corporate currencies at some stage, it will follow the above list. There are examples of national digital currencies following some of these rules = SOV for the Marshall Islands.

Republic of Marshall Islands has chosen Algorand blockchainas the underlying tech for their Digital Currency.

The Marshallese sovereign (SOV), could become the first state-backed digital currency to enter circulation, and is being built using the Algorand protocol by SFB Technologies,  the company selected by Marshall Islands for the SOV implementation. SFB Technologies after in-depth research decided that Algorand is the best choice as the underlying platform for SOV.

(BTW, if you look at the Consensus Distributed agenda provided above - you will find SFB case had been discussed there as well)

Per its agreement to build the Marshallese SOV, Algorand will provide base technology for the creation, issuance, and ongoing management of the digital currency for the Marshall Islands. The company will also provide technical support once the currency has launched, ensuring it will follow changes in the regulations.

The Republic of the Marshall Islands is a country of around 50,000 people living on 1,100 islands, scattered across 750,000 square miles of the Pacific Ocean. They are decentralised by nature.

They face many climate related problems, as well as funding and infrastructure to deal with these issues effectively.

Algorand for the SOV implementation

Algorand is the company behind an open-source, pure proof-of-stake blockchain protocol. The Algorand mainnet has been live since June 2019, attracting many companies already to build upon it. Algorand has enhanced the platform with more features over the past year including Smart Contracts, Algorand Standard Assets, and Atomic Transfers (learn more), and right now are fully functional and production-ready platform to be used at scale.

Co-Chains is a great innovation for the industry overall, and co-chains functionality was one of the reasons for the Marshall Islands to select Algorand for their SOV digital currency. SOV will be built on the permissioned version of Algorand, but interoperable with public blockchain and other private chains, as needed.

If you would like to learn more about Co-Chains and the interoperability of public and private chains, please check out this article. Here is a short version of what Co-Chain is:

Simply put, building Marshallese sovereign (SOV) on Co-Chain, you gain all the functionalities of an open, public, decentralised network, including functional and inclusive staking mechanism, but you can still isolate it from the bigger world, providing oversight required for regulatory purposes. You also enable public chain interoperability (communication with the broader world) as an optional feature.

Learn more about Algorand from this article

What are the design principles behind SOV?

SOV is a digital currency. Every transaction is stored on the SOV blockchain, ensuring transparency, security, and reliability.

Interesting that they have published a whitepaper as well. Read more, learn more, build your own opinion.

If you study the white-paper deep enough you will see that this is yet not fully decentralised approach, but surely step in the right direction as far as CBDC design is concerned. I would not expect CBDCs to be fully decentralized. Below you can learn more from the SOV webpage.

The trends are clear in my opinion. Blockchain is as an immutable ledger, offering fast value transfer and transactions settlement, at near-zero cost, already proved its case to Enterprises, Banking, and Governments. Now experimentation started with Government "cryptocurrencies'', or digital currencies if you will.

Mid-2019 Facebook's Libra was a wake-up call to the Central Banks that they have a competition in the game, as far as the creation of digital currencies is concerned, and it is clear Banks need to expedite the development of their CBDCs. We will either see nation-states coming up with their digital currencies first and maybe even one global currency at some point. In the interim period, we shall see private and public institutions joining forces (Large Corporations, Banks, Central Banks, Governments), and at some point probably even competing in the race to create the next global currency of trust, reserve currency, store of value and mean of exchange. In my opinion, we are going global rather sooner than later with digital currency implementations.

If you found this article interesting, please share, up-vote, and leave a comment. Oh.. BTW. I have a bonus video material for you.

GM at Bank for International Settlements (BIS) talking about their work with Central Banks, Libra, and other digital currency trends.

I am happy that projects like Algorand are involved at the front of CBDC discussion, giving a hope that we build it the right way from the very start.

Join the movement, get involved.