Financial Transactions have often been made through agreements, paperwork, or even verbally which has caused a lot of catastrophic consequences between parties agreeing. These methods are slow, less secure, less transparent, outdated, time-consuming, and less cost-effective, as a result of that, third parties are often associated to validate the terms in the agreement for both parties.

Smart Contracts are basic lines of code that are stored on the immutable blockchain and automatically execute when certain predefined terms are met and validated, Thus, removing the need for third party validation. Algorand provides both stateful and stateless contracts. Stateful Smart Contracts form the backbone for building distributed applications on the Algorand blockchain. These smart contracts provide access to on-chain state values and can be combined with other Algorand layer-1 features to implement dynamic and unique applications that take advantage of Algorand’s scalability, performance and quick transaction finality.

Algorand’s Smart contracts are highly reliable in that they are executed on a tamper-proof (trustless), secure and decentralized network, with no forking making all transactions final and also offer faster, error free, immutable applications that are cost effective for financial organizations.

Some advantages of using the blockchain are:

There are several ways blockchain is more secure than other record-keeping systems. Transactions must be agreed upon before they are recorded. After a transaction is approved, it is encrypted and linked to the previous transaction. This, along with the fact that information is stored across a network of computers instead of on a single server, makes it very difficult for hackers to compromise the transaction data. In any industry where protecting sensitive data is crucial — financial services, government, healthcare — blockchain has an opportunity to change how critical information is shared by helping to prevent fraud and unauthorized activity.

If your company deals with products that are traded through a complex supply chain, you’re familiar with how hard it can be to trace an item back to its origin. When exchanges of goods are recorded on a blockchain, you end up with an audit trail that shows where an asset came from and every stop it made on its journey. This historical transaction data can help to verify the authenticity of assets and prevent fraud.

When you use traditional, paper-heavy processes, trading anything is a time-consuming process that is prone to human error and often requires third-party mediation. By streamlining and automating these processes with blockchain, transactions can be completed faster and more efficiently. Since record-keeping is performed using a single digital ledger that is shared among participants, you don’t have to reconcile multiple ledgers and you end up with less clutter. And when everyone has access to the same information, it becomes easier to trust each other without the need for numerous intermediaries. Thus, clearing and settlement can occur much quicker.

For most businesses, reducing costs is a priority. With blockchain, you don’t need as many third parties or middlemen to make guarantees because it doesn’t matter if you can trust your trading partner. Instead, you just have to trust the data on the blockchain. You also won’t have to review so much documentation to complete a trade because everyone will have permissioned access to a single, immutable version. 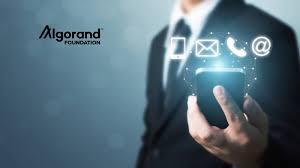 Algorand’s Smart Contracts (ASC1) offer the foundational attributes of security, scale, and decentralization found in Algorand’s Layer-1 protocol, allowing developers to take advantage of the network’s speed, cost-effectiveness, and simplicity. Enabling complex governed transactions with simplified tools that can build a wide range of applications, and removing the technical barriers that undermine blockchain adoption providing benefits that include:

Smart Contracts are highly flexible, reliable in that they are executed on a tamper-proof (trustless) network providing the transparency needed, with error-free, immutable, and accurate applications.

A financial revolution is coming, and financial institutions must wade through the increasing challenges they face and either adapt or risk being unseated by the competition. Today, money and the exchange of assets around the world are moved using complex systems that are slow and have many added fees with each intermediary. With more demands for things like cross-border payments and overseas purchasing, individuals and institutions looking to compete in the global economy need faster, scalable, easier, and safer ways to transact.

The disruption of the financial industry will be redesigned by new technologies, mainly led by blockchain.

Blockchain offers a vast range of opportunities with the transparency, speed, security and efficiency that customers demand, thus, leading the next evolution of financial applications.

Algorand, founded by Silvio Macali is set out to reinvent blockchain and developed the world’s first truly public, permisionless, scalable, and pure proof-of-stake protocol that does not fork making all transactions final, decentralized, secure and cost efficient.

Algorand is the first to provide immediate transaction finality, opening up exciting new use-cases and applications and is delivering the speed and ubiquitous infrastructure that financial institutions require to maintain control and governance over their operations.

With the newly added features such as Stateful Smart Contracts, Rekeying and Fast Catchup, transactions will be made seamless and faster.

With the secure, fast, reliable transaction processes with the Algorand blockchain, financial transactions will soon be powered by the blockchain technologies.

I have a background in computer science and I run a consultancy firm called KusuConsult that is fully registered in Nigeria and I have been into the crypto space since 2017. I have also worked with a few open source blockchain platforms. My passion is to see the Blockchain technology being deployed on every sector of the ecosystem in Nigeria and Africa. This is the reason why I have been deeply rooted in grass root education of blockchain and cryptocurrency.